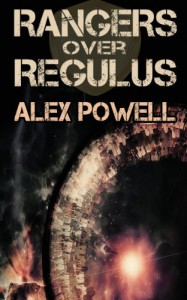 Liberty, who’s a vampire, still remembers how cruel life was to his kind. That’s one of the reasons why he avoids the government and works as an assassin on a space station. He just can’t imagine another life. But then a Ranger appears on his station and all hell breaks loose.

Rangers Over Regulus started out to be a really great read and I was totally convinced that I would enjoy every page!

But at some point, something changed for me. The story lost this special feeling it had at the beginning. I can’t really put my finger on it, maybe it’s because Liberty and Rory morphed into two lovesick guys, who would rather make out than fight – which isn’t exactly a bad thing… but I wanted a little bit more. Or it was Liberty and his reluctance to change sides. He’s a vampire with superhuman powers. And his boss? Totally human. And even though she knew his “secret” it wasn’t really reason enough for me to make the story believable.

This may sound like I didn’t enjoy the book at all – which is not true! The setting was great and the combination of western and sci-fi was also a winner. There were just some things I didn’t like as much as others.